Scent: Smoky, piney, like a campfire…
Steeped: Roughly 3.5 minutes in mesh ball, very hot but not boiling water
Appearance: Reddish-brown, translucent
Taste: Like a campfire! Best way to describe it, like no other drink you’ll taste. A slight fruity or floral taste.
Additions: Not sure I would drink this plain; sugar is surprisingly effective, I’ve also tried milk, you should taste the tea first to see how strong it is.

After a lengthy hiatus, I’m back to my tea reviews! I recently visited our local spice shop, Nuts ‘n’ Stuff, to restock my tea collection and in addition to lapsang souchong, I picked up Earl Grey, cinnamon orange spice, and chai. There’s nothing like being able to see and smell what you’re about to buy in a spice shop, that and the knowledgeable staff puts a supermarket to shame. (Go out and support your local businesses!)

Lapsang souchong is a very unique tea*, originating in China. I have no idea how to pronounce it, but it’s much easier than attempting the Chinese: 拉普山小種/正山小种! It’s a black tea dried over the smoke of a wood fire, such as pine. For those who have been around a campfire or bonfire, this tea smells exactly like that, and the flavor certainly picks up some of the smokiness. Don’t let the smoke blind you though, there’s more to this tea than that. With this batch, I notice a milder smoke and a very subtle, nearly obscured fruity taste. Like all teas, you can of course make it as strong or mild as you like, I find 3.5 minutes at just-under-boiling temperature to work best for most black teas, some a bit longer. Also consider that using loose leaf tea means some sediment will remain in the cup and continue to strengthen it.

My favorite thing to do with lapsang souchong tea is add sugar (you might not think a smoky sweetness would taste good, if so you are missing out on this). Sometimes I add milk but it really only serves to dilute a tea’s natural flavor and neutralize some of the acidity in certain varieties, so I use it only as needed. The smokiness of lapsang souchong can compliment a variety of meals, or it can be enjoyed alone 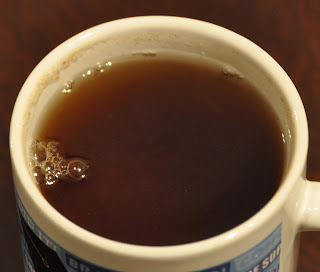 *Fun Fact: According to Wikipedia, it was the favorite tea of Winston Churchill, that’s pretty cool!

I also have to include this quote from the same article: “a man’s tea, deep and subtle and blended in some rugged place […] better even than whisky.”  Now, how many times have you thought of tea that way? 😉