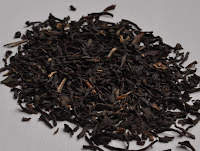 Scent: Mild floral, fruity scent
Steeped: Roughly 3.5 minutes in mesh ball
Appearance: Dark brown
Taste: Rich and earthy, the fruitiness is picked up as well, leaves a pleasant aftertaste.
Additions: Tried it plain and it’s surprisingly good, but I’m a sucker for sweet tea 🙂 Milk would be good, too, depending on how long you steep it.

So far in my explorations of tea, I’ve found a definite liking for black teas, while not having much success with green teas. I think my taste buds just are not used to whatever it is that appeals to green tea drinkers. Assam is another black tea, named for the region in India where it originated. I believe it’s also blended into a number of the other teas I’ve tried, which is not surprising. It has a flavor which is certainly compatible with many others, especially fruits.
This unknown* variety of Assam is one of the teas I could drink with no sugar or anything added, could not that it’s common for me to skip the sugar. Wikipedia claims Assam has a “malty” flavor, which is not a word that came to mind. I would say it tastes earthy and fruity, just what you’d expect from the smell and appearance. One point of interest, this tea seems to work very well with Splenda sweetener, the natural flavor seems complementary to the slight off-taste of an artificial sweetener. This is a good tea whether enjoyed on its own, as part of a meal, or blended with other ingredients.

* I could and probably should ask the owner of the shop where these teas come from and get some more info on the varieties. That way I can point others to them if they happen to live elsewhere (or if the shop stops selling them for some reason). 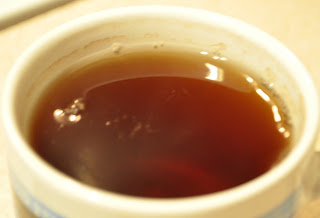